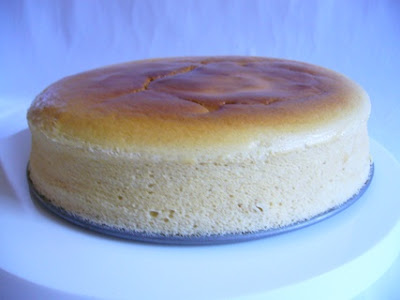 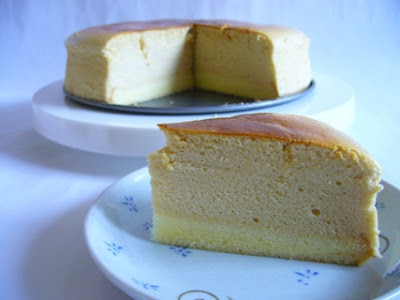 I love cheesecake, either it is light or rich, baked or non-baked I also enjoy them. Unfortunately most people around me, include my family don't like cheesecake. They disliked the creamy taste and after taste of the cheese. So this is why I seldom bake cheesecake. Haha, after I borrowed a recipes book on cheesecake (The Ultimate Indulgence Cheesecake by Alan Kok) now I started to get crazy on cheesecake again.

Steps:
1. Line the side and base of a 8" round springform baking tin with grease proof paper and place the sponge cake at the bottom.
2. Double-boil milk, peanut butter, cream cheese and sugar until cream cheese has melted completely.
3. Add in flour, stir and cook until mixture has thicken.
4. Remove from stove and set aside to cool.
5. Preheat oven to 170C. (Don't preheat the oven too early as the oven will be too hot.)
6. Whisk in egg yolk into the cream cheese mixture until well combined.
7. Strain the mixture into a bigger mixing bowl.
8. Use a cake mixer and whisk the egg whites till frothy.
9. Gradually add in the sugar and whisk till soft peaks form.
10.Fold in 1/4 of the meringue into the cream cheese mixture until combined.
11.Then fold in the rest of the meringue lightly in 3 portions until well combined.
12.Pour batter into the prepared cake tin, wrap the base and surrounding of the tin with 2 layers of foil.
13.Steam-bake cheesecake in a preheated oven for 15mins then reduce temperature to 140C and continue to steam-bake for 1hr and 45mins.
14.Leave the cheesecake to cool in the oven for 1hr with the door ajar.
15.Remove cake from tin and chill in the fridge for about 1hr.(You can also chill the whole cheesecake in the cake tin.)
16.Cut and serve the cheesecake.
Posted by Happy Flour at 11:43 AM

wow.. nicely baked cheesecake. I wish I could make it. I've failure attempts many times as the top crack during baking :(

So far i have not tried Peanut Butter Cheesecake b4...

Thanks, mine also have crack this time. I think should be due to the long hour steam-baking. Don't give up, sometime the problem is lie on our home small oven which have limited temperature control function.

Do give this a try, it very light and soft with enhanced taste of peanut butter. :)

Hi Happy Flour,
I would like to make this light cheesecake on coming Friday for my friend's birthday. However, I've few question hope you can help me.
May I know your springform pan is 8inches or 9 inches?
Can I use nutella instead of peanut butter?
Shall I used fan oven to bake it?
How did you unmold the cake so nicely? And tips?
Sorry too much question for you. I really need your help. Thanks a lot!

I used 8" spring form tin. The cake will shrink during cooling so it very easy to remove from tin. It also a good idea to use nutella.
But you have to reduce to 100g as
nutella has chocolate in it, I worry the texture will be dry.

I am not very sure of your oven temper. Mine is Tefal table top oven, I used top and bottom heating for this cheesecake and I find it too hot. So for the Chocolate Light Cheesecake I used bottom heating with fan mode and it better. The last 5mins I switch to grill in order to brown the top.
I think it better to test out the recipe first so that you can make any adjustment. Hope this help. Happy Baking. :)

Thanks Happy FLour, I think the nutella is quite sweet for this recipe also. I would follow your peanut butter version :P and will take note on all your advise. It's very helpful. Thank you so much! Cheers!

Hello Happy Flour,
I baked this peanut butter cheesecake this morning. It's cracked :( But the taste is good. I think the temperature should start from 140C. What do you think?

Ya, I will give it a try next time when I bake a cheesecake.

Can you point me to a recipe for the sponge cake? It would be especially helpful if the quantity of ingredients in that recipe makes a thin one as required in the recipe for this cheesecake. Thanks!

You can use vanilla sponge cake recipe from my blog, you can find it under labels-cake. Use an 8inches round tin instead of 7inches, slice the sponge into two slices.

Happy Flour
Singapore
A working mum balancing herself between family and work. Fortunate to have a loving husband and two sons sharing the burden. Baking is my favourite hobby.

I will appreciate this. If you need to use any content or pictures, please link to the original blog. Thanks.